NYC tech startups heading West, but only as far as the Hudson | Built In NYC Skip to main content
Loading...

NYC tech startups heading West, but only as far as the Hudson 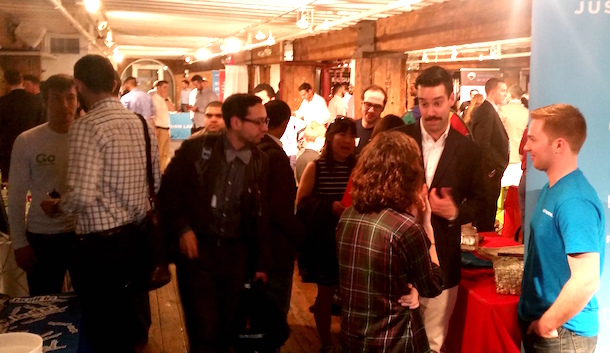 Tech is booming all over New York City.

Downtown was hailed as the new location for Silicon Alley as far back as the late 90s and since then Chelsea, DUMBO and Harlem have been hailed at one point as the "hottest neighborhood for tech."

What did all these locations have in common at the time? The answer is low rents, or at least comparatively lower rents than other areas of the city, whilst still being an attractive place for young people to work.

The streets lining the Hudson is the latest New York area attracting tech startups. On Tuesday, 60 startups gathered just west of 11th avenue, at La.Venue on 28th street, for the Alley Boost startup expo. They were followed by more than 4,000 attendees from the tech community which included entrepreneurs, angel investors, VCs, journalists, accelerator operators and enthusiastic jobseekers.

The Javitz center on 34th street regularly brings Silicon Alley to the west side highway and the massive construction in the area means the trend is likely to continue. Directly to the south Hudson Yards is under construction. It’s the largest building project the city has seen since Rockefeller Center and will house some of the biggest names in retail shopping and dining as well as some prominent tech companies, including Vayner media.

The 7 train will soon extend to 11th avenue, but the extra commute didn’t seem to put off the thousands of entrepreneurs streaming through the doors of La.Venue yesterday. There were a wide variety of startups on display, from apps that turn a bar into a virtual jukebox to coding platforms to 3D circuit board printing to a virtual marketplace for coworking spaces. 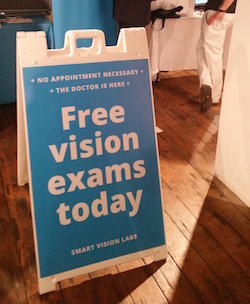 Probably the biggest line at any booth was for Smart Vision Labs, which was administering free eye tests. The startup allows anyone to carry out a vision test with an iPhone and their handheld SVOne autorefractor device. The device could transform mobile eye care in the developing world, where people don’t have access to hospitals or doctors.

Another popular startup was Tagme3D, a series of children’s books whose pages are literally brought to life via the augmented reality in accompanying apps.

Mob DJ allows bar patrons to select the music playlist via their smartphones. Users select songs to play and then anyone else using the app in the bar can vote the song choice up or down. You’d be able to tell a lot about the clientele of an establishment from the Mob DJ list!

As the exhibitors packed up their stalls and the crowd streamed out to the streets, people were looking at the area as an exciting new waterfront neighborhood, not just a construction site. Sounds a bit like Dumbo.