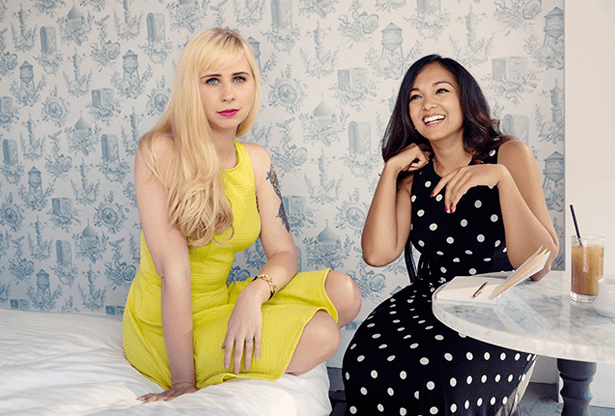 Her past ventures have included the widely successful Hue-Man Bookstore in Harlem, workshops for women entrepreneurs at Chase Bank and she currently oversees Villarosa Media, a publishing company primarily focused on black authors. While Villarosa’s multiple businesses in publishing and media have traditionally helped others share their stories, her story is now getting told.

In August of 2014, Erin Bagwell, founder of Feminist Wednesday, launched a Kickstarter campaign to fund her vision for a documentary film. Over 30 days, Bagwell’s campaign almost doubled its financial goals and raised over $100,000 to produce "Dream, Girl," a documentary telling the unsung stories of women entrepreneurs.

Created by an all-female production crew, the film unveils the narratives behind multiple female New Yorkers who pursued their entrepreneurial dreams and found success. From Joanne Wilson, Founder at Gotham Gal Ventures, to Villarosa, the film features over a dozen entrepreneurs as well as investors and cultural experts.

“One of the most valuable pieces of this whole process is the power of friendships and women supporting women,” said Minhas. “Erin and I made every decision about the film together and we took steps forward together, which let us amplify the effect our company is going to have—we’re more powerful together than we are alone.”

Now, the duo is aiming to disrupt documentaries by running the independent filmmaking process like a startup. Bagwell and Minhas are self-distributing the documentary, meaning they manage everything from production to how the final product will touch its audiences. They also determine how the film's revenue model will be profitable through sales, distribution and merchandising channels.

"As distributors and as a startup, we are responsible for how this product reaches our key audience, the kinds of merchandise we want to create to have the greatest impact and the strategies we need to employ to take this film and our tour around the world to impact the lives of millions," said Minhas. "This isn't just about one film. For us, this is about a larger movement to create meaningful feminist media that can and will change the world, and that takes a lean startup mentality along with a high appetite for risk and financial growth."

While women like Sheryl Sandberg and Sophia Amoruso have become widely recognized for their stories as female entrepreneurs, "Dream, Girl" aims to reveal the lesser-known accomplishments of the many women who also have powerful stories to share. As Brooklyn has the highest percentage of women led startups in the world, there is no shortage for these types of narratives in New York.

“My biggest hope for the film is that it will help women to view themselves as powerful figures within the economy,” said Minhas. “I hope women will be able to see themselves as bosses, know what it really means to start your own company and I hope women feel more economically empowered to launch their own companies.”

"Dream, Girl" is set for release in the Spring of 2016. The world premier will be held in New York City.