A history of WeWork, the multi-billion dollar company taking over NYC 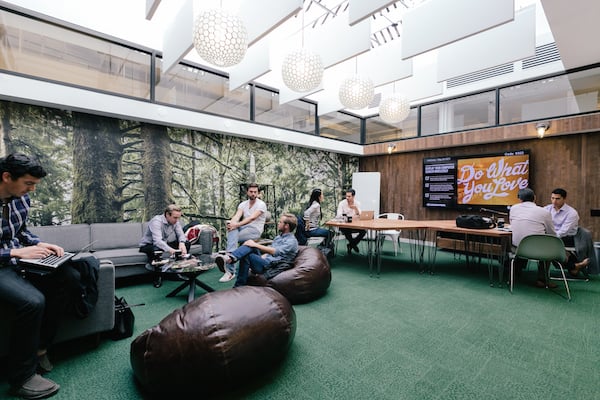 WeWork Technology
View Profile
Our headquarters in NYC sits in Chelsea, but our growing tech team works from our SoHo, Chelsea, and Greenwich Village offices.
Follow
, the New York-based coworking giant, has become a global force as the 11th most valuable startup in the world. The company started as an eco-friendly coworking experiment in Brooklyn, and has since morphed into the place to work for entrepreneurs, especially in Silicon Alley. Since coming to fruition in 2011, WeWork has raised a whopping $969 million in funding and has a $10 billion valuation. Here’s a look at the company’s rise to the top of the startup world.

2008: Our story begins in DUMBO, Brooklyn. Before starting WeWork, the company’s now CEO and cofounder, Adam Neumann, owned a baby clothing company. Neumann was working in the same building as his future cofounder, Miguel McKelvey, who was a lead architect at a small firm. The building that the two worked in was partially vacant, so Neumann and McKelvey decided they should try to fill the space as a coworking venue for other entrepreneurs. Thus, Green Desk, the earliest version of WeWork, was born. Green Desk’s focus was centered around building a sustainable coworking space, complete with sustainable office furniture.

2010: Neumann and McKelvey sold Green Desk and WeWork opened its doors to entrepreneurs at its first location in SoHo.

April 2011: WeWork launched the first WeWork Labs, which functions as a startup incubator within WeWork’s network. WeWork Labs provides an open workspace with the goal of encouraging collaboration between entrepreneurial members.

February 2012: WeWork Labs, which was operating out of WeWork Soho, relocated to 175 Varick Street (*where Built In NYC currently makes its home).

January 2012: WeWork raised a $6.85 million angel round and opened its first space in Los Angeles.

May 2012: At this point, the company had established four WeWork offices in New York and one in Los Angeles. WeWork Labs then announced it would be opening its first space in San Francisco, and would hold approximately 100 entrepreneurs, designers and developers.

December 2014: The company raised a whopping $355 million Series D round of funding. The deal valued the company at $5 billion at the time.

May 2015: At the beginning of what would prove to be a busy summer for WeWork, the company announced a partnership with Chase to offer WeWork members discounted rates and premium customer service with Chase Commerce services.

June 2015: In its most recent funding round, the coworking juggernaut raised $433.93 million. On June 1, the company also announced that Artie Minson, former Chief Financial Officer of Time Warner Cable, would join the company as President and Chief Operating Officer.

August 2015: The company made its first acquisition with CASE—a building information and technology consultancy.

Now: Since WeWork came onto the New York tech scene in 2010, the company has expanded to cities across the country and the world. In total, WeWork has 54 coworking spaces in New York, Boston, Philadelphia, Washington DC, Miami, Chicago, Austin, Berkeley, San Francisco, Los Angeles, Portland, and Seattle, with international locations in London and Amsterdam, along with new locations in Tel Aviv and Herzliya in Israel.