Inside 5 of NYC's swankiest startup offices

Have you ever wondered how those lucky, privileged few, managed to land a job at a company with offices that look like a playground for adults? Well, we found five such companies, and they were all nice enough to give us a tour of their offices. None of the companies were very large — the largest had just over 100 employees — but all had offices that are pretty much guaranteed to leave you with office envy. The good news? Almost all of them are hiring or planning on hiring soon.

Movable Ink's office is massive and spacious — especially by Manhattan standards. Spread out over two floors, the mezzanine serves as a really sweet events space and had a full length shuffleboard table and a shuffleboard. When we visited, there was ice cold, jet-fuel strength coffee on tap, as well as a kegerator full of Two Roads to Ruin IPA — which was delicious.

How many employees work at the office? Approximately 80

When did you move in? We moved into the space in January of 2014 and expanded in December 2015.

You have a TON of space here. What's your favorite part? My favorite space is the mezzanine! It's a fantastic event space where we hold meetups, client events and company Town Halls. If employees want a break for a latte or unhealthy snack (we make you work for the bad snacks) its a soothing, quiet place to hang out during the day.

It's hard to want for anything in a space like this, but, I have to ask, is there anything that would make the space better? Nap pods for the day after one of our many official or unofficial team outings. 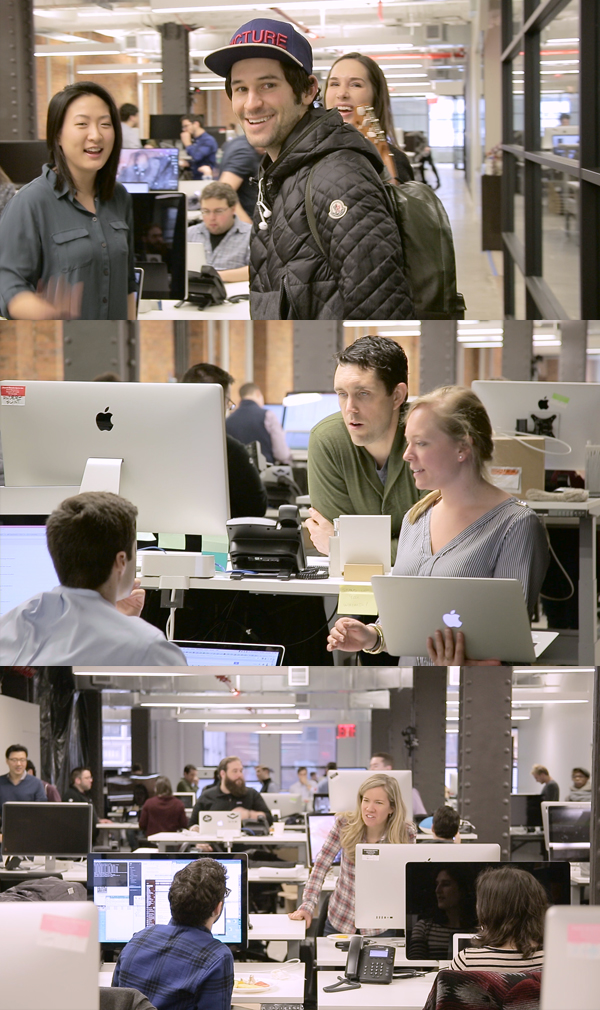 VTS
View Profile
We are hiring

VTS is still in the process of moving into their new office, and we were unable to send one of our photographers to capture the space (we didn't want to get in the way of the movers). However, when we caught up with them, they had been nice enough to snap a couple photos of the new office setup, in action. From the looks of things, it's going to be pretty sweet space. We'll be sure and check back in when they're more settled.

How many employees work at the office? Currently 111 and rising. Q1 has been a really exciting time.

How many square feet is the space? 15,000 square feet
When did you start moving into the space? March 1st, 2016
What is your favorite part of the space? The list really goes on and on there. It's a super collaborative, wide open space with big windows and exposed brick walls. We've got these fancy new electric desks that can become a standing desk with the push of a button. We're right off Bryant Park, so plans for summer lunch meetings in the park are already in the works... All that being said, the kegerator in the kitchen is a serious fan favorite. Collaboration is cool. Collaboration + beer on tap = cooler.
Summer lunches in Bryant Park and a kegerator sounds pretty perfect. Was there anything you were hoping to get in the new office? Well... I suppose since all our conference rooms are named after surfing locations (we actually have a VTS surfing club), it would be nice to have one of those never ending wave machines in here.
They're Hiring | View 17 JobsVTS is Hiring | View 17 Jobs

LittleThing's office is spread out over two floors of a building just off of 6th Avenue. The office features a treehouse, complete with blankets and pillows. When we stopped by to photograph the space people were actually meditating in the conference room — and man, did they look peaceful. We caught up with LittleThing's cofounder and CEO, Joe Speiser and asked him about the space.

How many employees work at the office? 73

When did you move into the space? September of 2014

What is your favorite part of the space? Our "swing spaces" are pretty neat, especially the conference rooms that turn into multi-use offices and communal areas that transition into desks and/or informal meeting places. But I know a lot of our employees love the ping pong room.

What is one thing you really wish the space included? A food conveyor belt from Chick-fil-A across the street to deliver chicken biscuit breakfast sandwiches.

Get Alerted for Jobs from LittleThings

The first thing you notice when you walk into Homepolish's office is the massive windows. They stretch along an entire wall, from the floor to the ceiling, and offer some pretty amazing views of New York City. Once you can tear your eyes away from that, you notice that they have three breakout rooms that look like greenhouses, each done up in a different style and named after a different Beyonce song. Oh, and, let's not forget the best part, a massive Don Draper quote located behind a full bar.

How many employees work at the office? 35

What is your favorite part of the space? The windows. I visited about 15 offices spaces, but when I walked through the front door it was love at first site.

You do have insanely big and beautiful windows. Is there anything else you wish the space had? A commercial grade kitchen. We have a few fantastic cooks (and others who can make a mean cocktail), and it would be great to have a place for them to work their magic.

Get Alerted for Jobs from Homepolish

Splash's offices are just plain fun. The entire space is crammed full of artwork and all sorts of crazy nick-nacks. I mean, seriously, have you ever been in an office where there is a massive wooden desk that is really a boombox? It was insane. We've also heard rumors of some pretty crazy team building parties that include massive amounts of shrimp and sharpies.

How many employees work at the office? 50

What is your favorite part of the space? The Deep-End. It's where we hold our Tuesday morning team SCRUM & weekly product demos. We've got a chandelier and a handmade desk that's actually a working boombox. Every meeting in the Deep-End begins with a change-up in lighting and some good music. Every meeting should start that way.

Disco-party meetings! That's awesome. Is there anything the office doesn't have that you wish it did? I wish we had trampoline floors. Also we are looking into permanent bubble-tape dispensers.