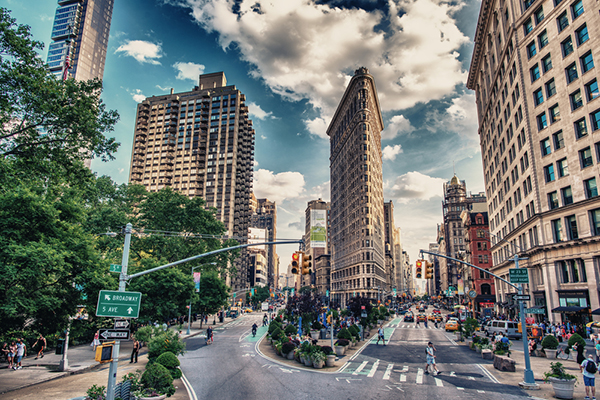 The exact borders of the Flatiron District are up for debate, but for this guide, we're defining them as everything from Lexington Avenue to 6th Avenue, and from 14th to 34th Streets.

Actually, the Flatiron District has only even been called that since the mid-80's, when real estate agents wanted a swanky-sounding name to sell apartments. Before that, the area was sometimes called the Toy District or the Photo District — names you never hear anymore.

Today the Flatiron District is home to a large, wealthy residential population, many popular restaurants, and a good deal of the country's publishing industry. It also happens to be a main hub of the New York tech scene.

Datadog
View Profile
We are hiring
We are located in the New York Times building and 5-min walk away from Times Square. The 42 St Port Authority Bus Terminal is right across the street, providing a highly accessible transportation network.
,

Betterment
View Profile
We are hiring
We're centrally located in Manhattan right next to Madison Square Park. Enjoy all the great eats and a nice stroll around the park.
,

Word on the Street: "The Flatiron neighborhood is home to so many businesses — big and small, both inside and outside of the tech industry — as well as a bevy of restaurants and coffee shops to keep everyone going throughout the week. With both Madison Square Park and Union Square just a couple of blocks away, it's the perfect neighborhood for getting some fresh air during the day. It also doesn't hurt that it's incredibly accessible to our commuters that come via bike (and Citibike), train, bus and foot!" — Marissa Arnold,