Street art in the office: the story behind the graffiti at 4 NYC tech companies | Built In NYC Skip to main content
Loading...

Street art in the office: the story behind the graffiti at 4 NYC tech companies

Tech companies are notorious for having amazing offices. Standing desks, nap rooms and fully stocked kitchens are the norm. But another common feature of the tech office often goes overlooked — the artwork.

New York tech companies put a lot of effort into adorning their spaces and some have taken to hiring full-on graffiti artists to make custom pieces. Curious, we thought we'd ask a couple of companies to tell us about some of the work we've seen over the years.

Here is the story behind the graffiti at four NYC tech companies. 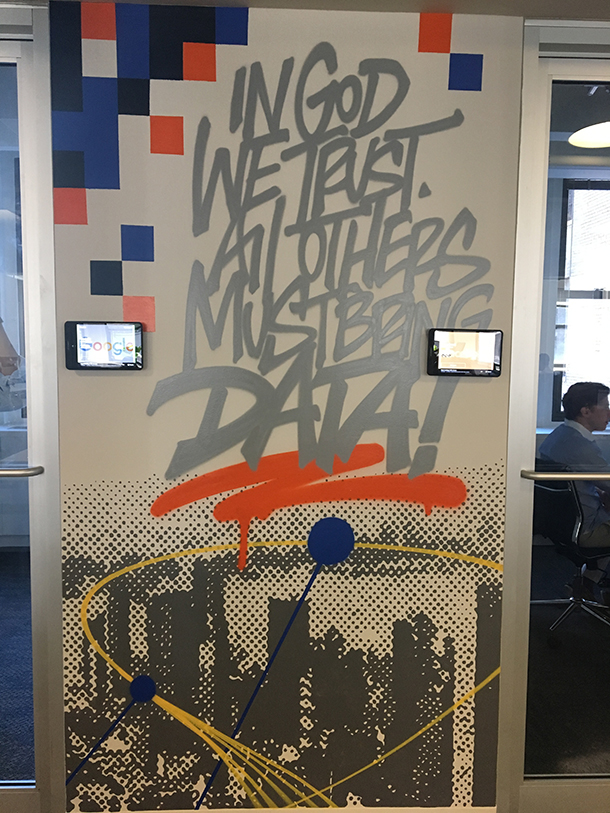 The artwork on the walls of CB Insights' offices was commissioned by Masterpiece NYC, a New York-based company that specializes in creating tailor-made murals.

"All the quotes posted in the graffiti are about data. CB Insights is a tech market intelligence platform focused solely on data."

All of the pieces in the office feature New York landmark buildings with sayings about the importance of data on them: 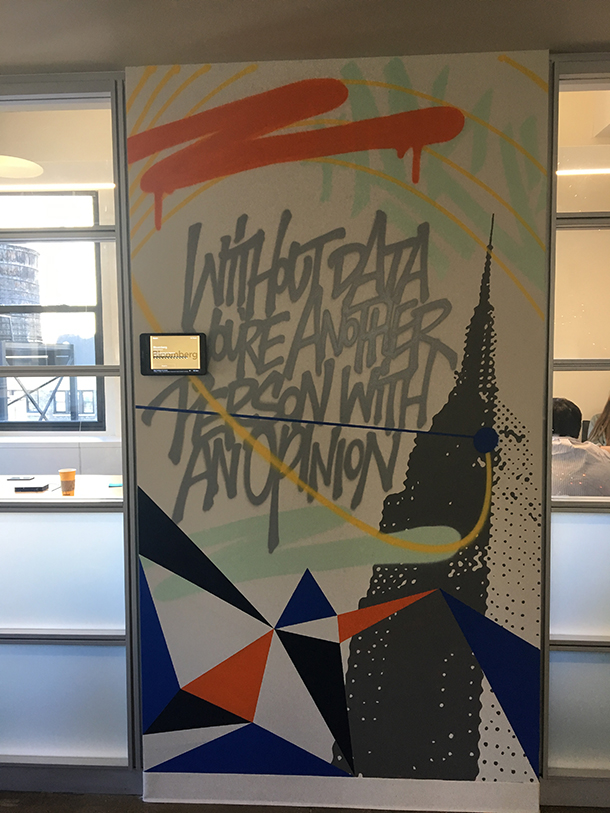 "The graffiti focuses on what CB Insights does, which is a tech market intelligence platform that analyzes millions of data points on venture capital, startups, patents, partnerships and news media to predict technology trends." 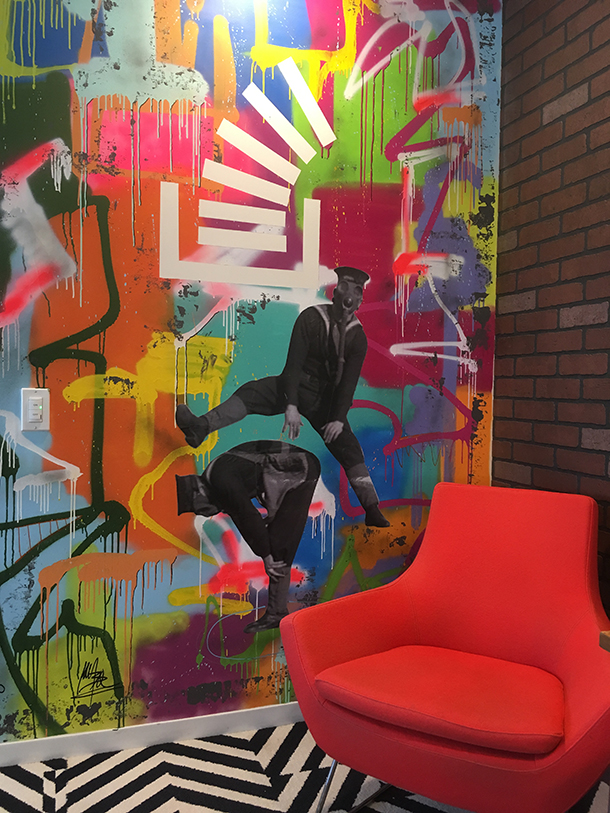 Up on the 28th floor of Stack Overflow's offices in FiDi there is a small phone room with a big, colorful surprise.

"Street artists JPO and Jilly Ballistic teamed up using spray paint, paste and paper to create an eye-popping and playful scene. JPO's wild style has been hitting the streets of NYC since 2013 and he has had the honor of painting walls for MTV and Stack alike. Jilly Ballistic has been wheat-pasting the subways with her historic imagery for the last 5 years, hitting platforms, ads and trains cars. They were asked to remain true to their style while embracing Stack's diversity, so color and positivity were in order!"

Get Alerted for Jobs from Stack Overflow 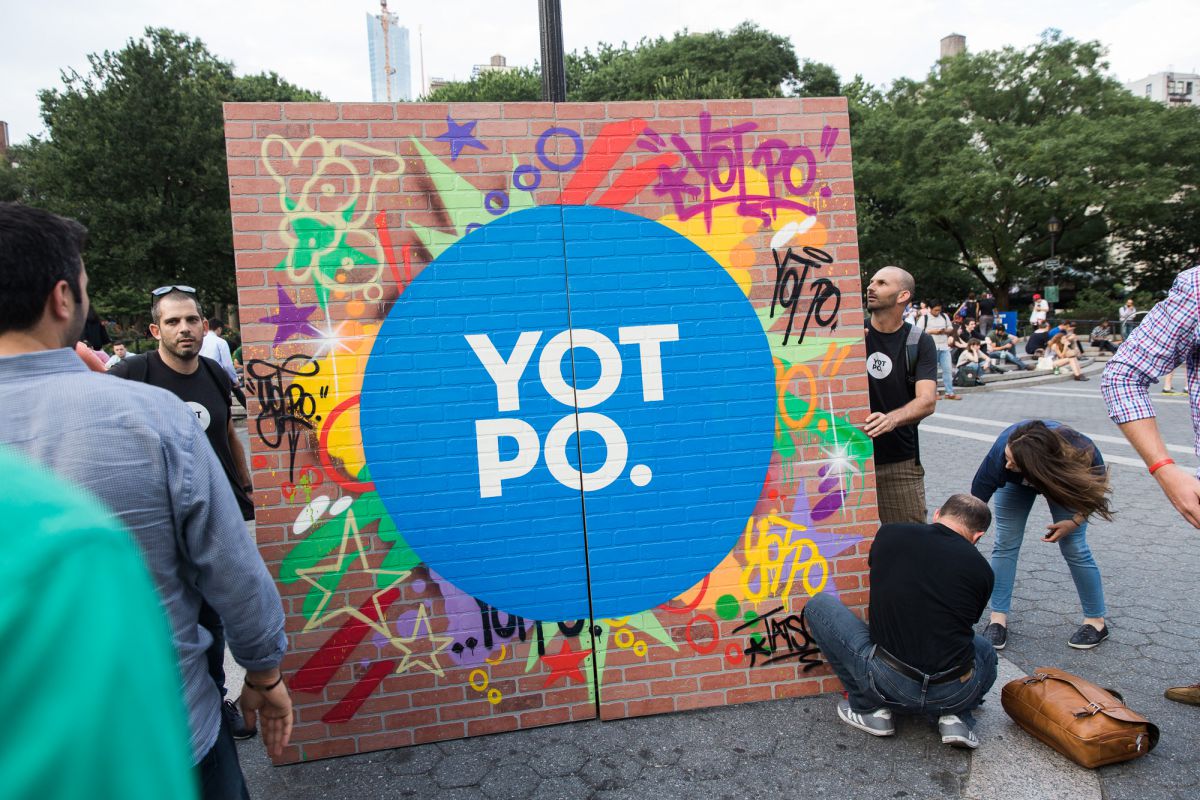 When you first walk into Yotpo's office, you see this piece by Tats Cru. When Yotpo moved into their new space in the Flatiron District, they actually hand-carried the massive piece to its new home. The photo above was taken by Harrison Steg on that journey, as the team rested in Union Square.

"It looks really cool. Our first legit office in NYC had exposed brick, which inspired a graffiti vibe and we ran with it. Exposed brick obviously became a non-negotiable for our current office as well."

So, how did they get ahold of the piece in the first place?

"The story is that we paid cash money for it. It was a deal straight out of the backseat of a car."