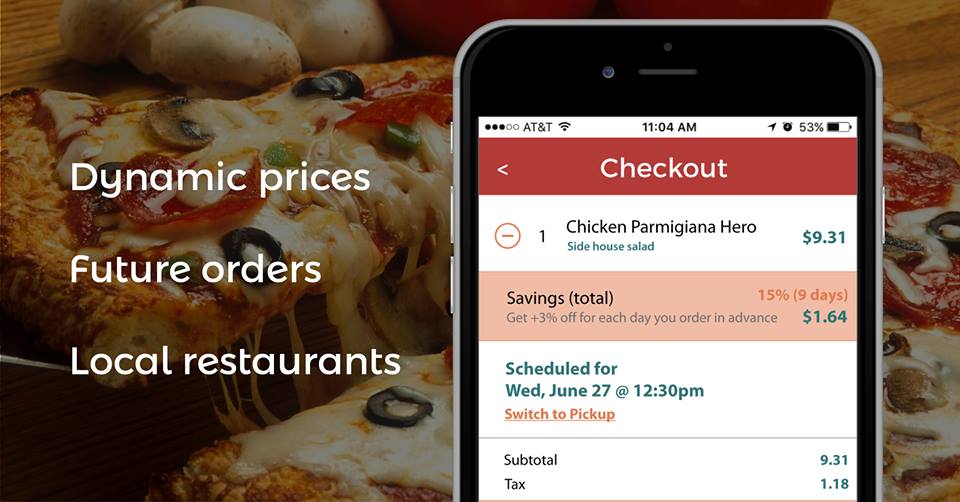 New Yorkers may joke about eating delivery food every night, but the reality is that for all but the wealthiest, these services are more an infrequent luxury than the norm. After all, paying full price for a menu item, then adding on tax, tip and delivery makes the experience much pricier than the $1 pizza slice from around the corner.

“Right now, the median salary of people in the city is around $54,000 a year — which is really low for living in New York City,” Mohamed Merzouk, CEO and cofounder of Gebni said. “These people are priced out of your average online ordering sites. To order from Grubhub, you have to be making a lot of money.”

Merzouk knows firsthand. An Algerian by birth, he came to the United States in 2010 to earn a graduate degree in investment and management at Pace University. While studying, he also worked at the university to help cover costs, leaving little time to cook. Ordering delivery food quickly became the norm.

“It started to get really expensive, even though I was ordering off schedule,” Merzouk said. “I was mostly ordering between 2 p.m. to 5 p.m. and I knew the restaurants weren’t too busy at that time. Yet, I was paying full price.”

That’s when he had the idea for Gebni.

Gebni is an app that dynamically prices food in real time, according to supply and demand. If a restaurant has too much of a certain item, or one menu item that’s wildly popular, Gebni will automatically price them to maximize profits.

That means that for a consumer, you’ll save money if you’re willing to order at odd hours or settle for the less popular menu items. Or, if you really want to order the restaurant’s specialty at 8 p.m. on a cold, rainy Monday, you'll pay for the privilege.

Gebni lets restaurants set the highest and lowest amount they'll take for various menu items. With these limits in mind, Gebni then does the heavy lifting of pricing in real time.

“Restaurant managers know their margins the best," Merzouk said. "We’re not going to price their products at a price that will hurt their business.”

But, let’s say that a restaurant happens to have 300 pounds of chicken that is about to expire, but everyone is ordering cheeseburgers. Gebni’s software will automatically send the price of chicken sandwiches, chicken parmesan and chicken a la anything plummeting while also taking into account the price and supply of the other ingredients in the dish. The restaurant will end up with slimmer margins on those items but that will be more than made up for by not having to take a loss throwing out rotten chicken.

“It’s like happy hour on the go, in real-time," Merzouk said. “By dynamically pricing the food, we can cut down on a lot of food waste.”

Gebni launched publically this month after completing a private beta. For now, the service only works with around 50 restaurants, but the company plans on increasing that number rapidly over the next couple of months.

For now, Gebni is running on a $100,000 angel round and is looking to close a pre-seed round in the near future.

now of a company that deserves coverage? Let us know or tweet us @builtinnewyork.