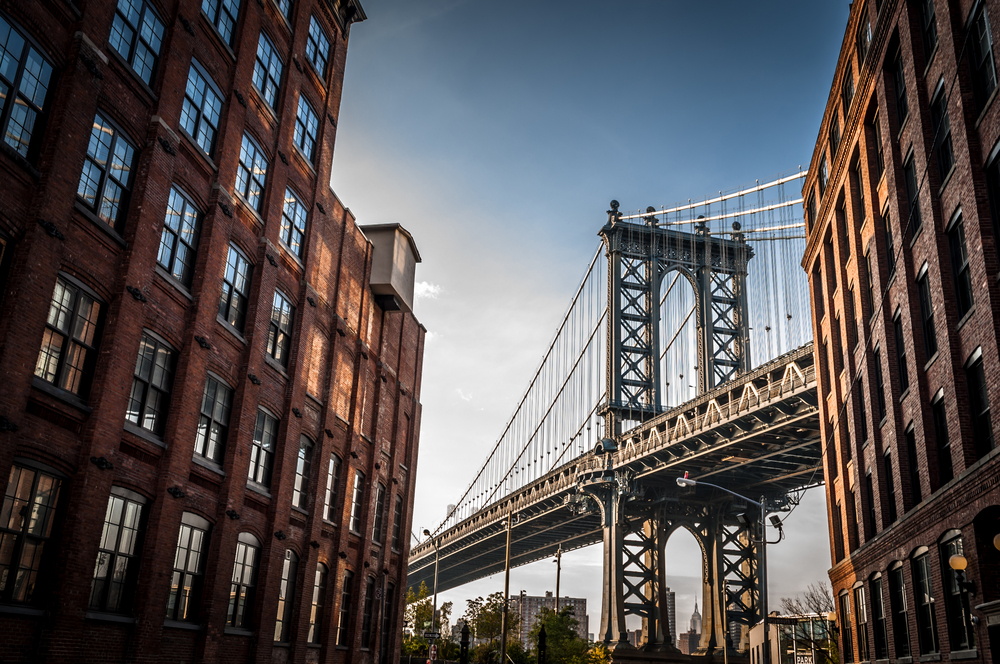 Dumbo is home to more tech companies than any other neighborhood in Brooklyn.

The neighborhood's early tech boom began for several reasons: cheap commercial rents relative to its proximity to the city, large open spaces conducive for the open offices preferred by startups and a talented workforce. The area has since changed dramatically from the warehouse neighborhood it was, beginning largely when creative agency huge first moved there in 1999.

Probably the most famous resident is online marketplace Etsy, which still employs 90 percent of its workforce at the Brooklyn HQ. In 2016 Etsy will move up the hill (see map below) to Dumbo Heights into the former Jehovah’s Witnesses’ Watchtower network of five buildings, which is being developed into a new tech hub.

Word on the street: "When we were founded in DUMBO, the neighborhood gave us the space to grow and create a culture and a business of our own, free from the constraints and conventions of Manhattan. In many ways, DUMBO has come to represent the most innovative and creative elements of New York's new Brooklyn-led identity. We're proud to have been part of the growth and development of the neighborhood over the years, and happy to see that as our business and the industry that is based here continues to evolve, DUMBO continues to be home for a community of artists, entrepreneurs, and people who want to do big things." - Sam Weston, VP of communications, Huge Inc.

What the VCs say: Charlie O'Donnell, founder of Brooklyn Bridge Ventures, said it's no longer cheaper rents that attracts startups to Dumbo: "Just a few years ago, you could get space at $18-25 per square foot. Prices [still] seem better than in the city, but not really by much anymore. Now I think it's more about where people live. Why commute 45 to an hour into the city each day when you can bike or train over to Dumbo from many Brooklyn neighborhoods in less than a half hour? Plus, it's getting more interesting. Between Dumbo Heights on one end and Jay and Empire Stores on the other, you're finally going to get some destinations and critical density of places people can hangout, especially after hours."

Rents: According to CBRE’s Q3 Brooklyn MarketView, the DUMBO submarket has the borough’s highest average asking rent and availability rate. This is driven by the 242,200 sq. ft. of available space at Empire Stores, where asking rents range from $65 per sq. ft. on lower floors up to $85 per sq. ft. on upper floors, as well as availabilities at DUMBO Heights.

Citibike: If you don’t mind bouncing across the cobbled streets biking is a good option. There’s not much traffic on the streets and there are 8 citi bike stations housing more than 100 shared bikes in the vicinity.

Public Transport: The A,C (High St) and F trains (York St) run into Dumbo, making it accessible from anywhere on the subway system. The East River Ferry will also drop you just under the Brooklyn Brigde and there are a number of buses running into the area. If you ride New York buses the B62, B67, B69 all run into DUMBO.

Driving: If for some reason you’re driving to work in the city, the BQE runs right over Dumbo and you can drive from the city across the Brooklyn or Manhattan bridges. Parking is cheaper than in Manhattan but not much.

Best places for a caffeine jolt: Brooklyn Roasting company has a large coffee shop on the waterfront where they also roast their beans. It has a relaxed vibe and many use it as their office. Other good options are One Girl Cookie and Almondine Bakery for some of the best croissants in town.