How a 22-year-old rose to the top sales position at ContextMedia | Built In NYC Skip to main content
Loading... 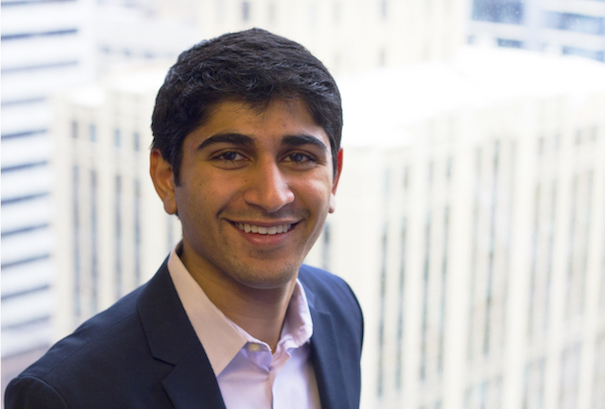 It’s not very common to have a 22-year-old in charge. But, that’s the glory of the startup. Say goodbye to ancient hierarchy and meaningless experience minimums — tech startups want and need the best people for the job.
For

Outcome Health
View Profile
We are hiring
, that means EVP of Business Growth and Analytics Ashik Desai, a 22-year-old New York native who always dreamed of being a doctor. Instead, the young team member splits his time between Chicago and New York City, leading a sales team of over 20 people and doubling the top line year over year for the past two years for one of the nation's fastest growing startups. If all goes as planned, they’re on track to break $100 million next year and they're working with over 100 brands.
So, how did that happen? It’s a classic case of making sure you explore all your options.
From New York to Evanston
Desai came to Evanston, Illinois in 2010 for the Honors Program in Medical Education at Northwestern University. He wanted a fast track to becoming a physician and the young student enjoyed the direct approach it took to getting into the medical field and that it allowed for more hands-on experience as well as a greater freedom of curriculum.
As Desai embraced that freedom, he became more interested in healthcare as an industry and got involved with the Institute for Student Business Education (ISBE), a Northwestern organization founded by ContextMedia founders Rishi Shah and Shradha Agarwal who were still leading the organization at the time.
The startup community in Chicago was just starting to blossom and Desai expressed his curiosity to Shah and Agarwal. That’s when he first got the feeling from these young founders that there may be a way to make an impact in the medical world in a less traditional role.
He began as an intern at ContextMedia in the summer of 2012, helping different departments and getting in on the ground floor of the rapidly growing startup. Soon after, graduation came along, and it was time to make a real decision — startup life or medical school?
Startup life
It’s no secret Ashik chose startup life, and has since created and grown a sales team from 2 to over 20 employees. He puts an emphasis on culture, searching for three things in new hires: authentic, humble and empathetic people.
“You really want to find people who are genuine in who they are,” Desai said. “The person that they are in work, in meetings, is the same person you’d run into at the supermarket.”
So, is it a bit awkward managing older employees, some of which can be more than 30 years your senior? Not when Desai’s mantra is working together on everything. He emphasizes that the entire team has the same goals, so it’s not about who reports to who. To maintain a collaborative culture, he holds monthly town hall meetings and open forums which essentially act as office hours.
“We’re one army headed together into the same thing,” Desai said. “We've created an organization that’s highly customer centric. So whether it’s a sales person, their manager, anyone, they’re thinking, how do we do better with our customers? Everyone is oriented around the same revenue goal and gives support to one another.”
Navigating the healthcare space
As regulations surrounding healthcare have changed drastically over the past several years, ContextMedia has used these transitions to their advantage. Consumers value technology and convenience more than ever, making their advertising digestible and educational. Sales cycles can be longer and there’s a potential for greater revenue as patients having more control over their care.
And it’s clearly working — the rapidly growing company is impacting over 10 million patient visits each month through digital content in healthcare practices nationwide.
“As I look ahead, even to just the next 2-3 years, it’s going to be a really, really fun journey,” Desai said. “If you have a hockey stick, we haven’t even started up that shaft.”
Have a tip for us or know of a company that deserves coverage? Email us via [email protected]