Girls Who Code offering $1 million in scholarships for classes nationwide 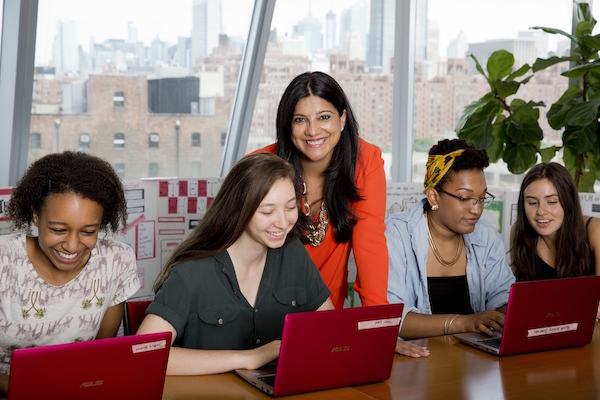 Reshma Saujani is the CEO and founder of a company that is literally changing the face of the tech industry.
They aren’t building phones, drones, rockets or bots. But so far, they’ve taught 10,000 girls to code in free summer classes held in 42 states. And this year,

Girls Who Code
View Profile
Follow
is offering $1 million in scholarships to offset the cost of forgoing a summer job to attend the seven-week program. (Here’s where to apply.)
Local classes will be hosted by AT&T, Goldman Sachs and IBM, among other partners.
Since Saujani founded Girls Who Code in 2012, the program has grown from a single class of 20 girls in New York to a national movement with partners throughout the tech industry volunteering time and space to introduce girls to computer science.
“Before Girls Who Code, I never thought I would have pursued computer science as a major in college,” an alumna was quoted as saying in a press release this week. “That summer really changed my life. I met an incredible group of girls who shared my interest in computer science as well as female professionals in the tech industry who taught and inspired me.”
This year, partner companies will host 78 course programs for 1,560 girls, a 37 percent increase from last year.

The funds come from the company’s operating budget and donations from sponsors, which include major tech and media corporations as well as fashion brands and the Marc and Laura Andreessen Foundation.
Scholarships have been awarded based on financial need, making the program a benefit to the digital divide between the haves and have-nots as well as between men and women.

According to Saujani, things weren’t always this bad for women in tech.
There are a number of theories about why computer science became a male-dominated field at the end of the last century, but many people point to home PCs mostly being marketed to — and purchased for — boys.
That led to the rise of the brogrammer myth and stereotypes of geeks with bad hygiene perpetuated by movies like Revenge of the Nerds. Girls said, ‘That’s not for me.’
But Saujani said there’s another, more nuanced problem.
“As a society, we’ve done a bad job of explaining what computer science is,” she said. “We haven’t made that connection between what’s a change agent and what’s a technologist. Coding can be a way to get clean drinking water to people in third-world countries.”

It’s no stretch to consider Saujani a change agent herself.
She was bred to be one by political refugee parents who read to her as a young child from the works of Martin Luther King, Mahatma Gandhi and Eleanor Roosevelt. After earning her Masters in Public Policy from Harvard, she supported Nelson Mandela’s post-apartheid government from the National Democratic Institute in South Africa.
After serving on the finance committee of Hillary Clinton’s 2008 presidential bid, she was inspired by the candidate’s Democratic primary concession speech to leave her career in law and finance to run for Congress.
Saujani was soundly defeated, but used her experience to pour her passion into founding Girls Who Code.

We asked Saujani what it takes to make a serious effort to impact diversity in tech. She said it matters who the leader is, and what the intentions are.
“I really think what’s happening at Salesforce [matching men and women’s pay] is really powerful, but there’s a ton more work to do,” she said. “I don’t think the lack of diversity we see at current tech companies even makes sense for the businesses.”
That’s because cultures and policies that are hostile to women contribute to churn. For example, if an employer doesn’t offer paid paternity to a father, the mother is often forced to leave her job.
"As a tech company ourselves, we see the need for more diversity within our company," Marissa Shorenstein, president of AT&T New York, told CNN Money when the scholarship was announced earlier this week. "It opens [girls] up to the possibility of a career in computer science, which we know is a gateway to better employment for them and a brighter economic future."
That’s why Girls Who Code involves so many fathers.
“Our movement is different because of our male allies. Many these tech men have daughters, and they’re seeing what’s happening with culture at these companies,” Saujani said. “You’re seeing more men and fathers who are deeply passionate about this issue.”
Have a tip for us or know of a company that deserves coverage? Email us via [email protected].