It’s been quite the journey, but at long last the 2016 presidential race is nearing its end. Since its start, this race has fluctuated between unpredictable to downright insane, bolstered by a spectrum of media coverage that ran the gamut from must-see coverage to I-can’t-watch-another-minute TV.

Through its ups and downs — it’s scandals and fleeting semblances of compassion — this political season has been historic. A business mogul and reality TV star won the Republican nomination for president. Hillary Clinton became the first woman nominated for president by a major U.S. party. Early voting has indicated that over 22 million people have already voted, with the number of voters turning out sharply higher in a number of states than in previous presidential elections.

Finally, Election Day is here and we will soon elect the next President of the United States. Here are the tech companies that will help you get through the next 24 hours:

Livestream, the video live streaming platform based in Brooklyn, will be powering USA Today’s live coverage of election day beginning at 5:00 a.m. EST. The broadcast will cover voting, results and reactions.

Get Alerted for Jobs from Livestream

BuzzFeed is partnering with Twitter to broadcast a five-and-a-half hour live show on election night on Twitter. The company’s reporters will be contributing from all over the globe, and BuzzFeed will be recapping highlights from this year’s presidential race. BuzzFeed is also going to be “calling” each state in its own, BuzzFeed-y way, by aggregating data gathered directly from the states, other media outlets, the public tallies from the Associated Press and then projecting its findings on Twitter.

Location intelligence company Foursquare is offering New York City voters free coffee on Election Day. To redeem a free beverage, which the company is offering voters through a partnership with CBS News, users simply enter their addresses on Foursquare’s ‘Vote, then Eat!’ map to get recommendations on where to grab coffee near their polling place.

Get Alerted for Jobs from Foursquare 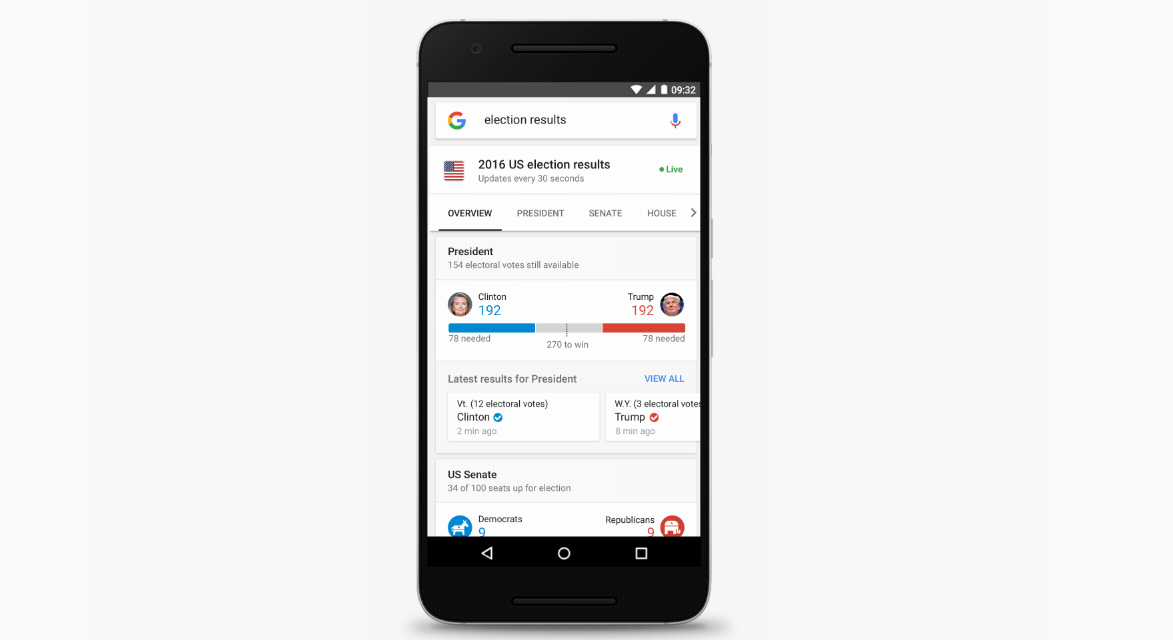 Google has said it will display election results as soon as the polls close, providing detailed information on the outcomes of all races as well as state-level ballot propositions and referenda. For users who search ‘election results’ Google will continuously update results every 30 seconds. Google has been a valuable resource throughout the election cycle, releasing in-depth search results to help citizens in register to vote, find their local polling place, as well as explain how to vote and who is on their ballot. In fact, since releasing these in-depth search results, Google has seen a 233 percent increase in traffic in the search for ‘how to vote’ in comparison with 2012, according to its blog.

Get Alerted for Jobs from Google

theSkimm
View Profile
We are hiring

TheSkimm set out to help get millennial women (its primary reader demographic) to vote through a campaign designed to engage its four million active subscribers with the election. In its partnership with RockTheVote, theSkimm registered more than 110,000 of its newsletter readers, and nearly 95,000 of them are women.

They're Hiring | View 5 JobstheSkimm is Hiring | View 5 Jobs
Have a news tip for us or know of a company that deserves coverage? Let us know or tweet us @builtinnewyork.
Jobs from companies in this blog16 open jobs
All Jobs
Finance
Dev + Engineer
HR
Internships
Marketing
Operations
Product
Content
Marketing