Feeling sounds and hearing colors? How this startup is giving hearing to the deaf | Built In NYC Skip to main content
Loading...

Feeling sounds and hearing colors? How this startup is giving hearing to the deaf 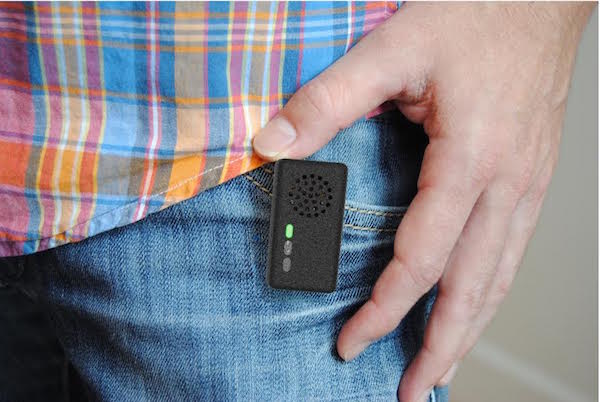 Furenexo, a startup looking to tackle the lack of affordable, accessible tech for people with disabilities, announced its launch today in the form of a Kickstarter for a product called Sound Sense.
The company is asking for $80,000 to create a thumb-sized device to help alert people with hearing loss of loud sounds and signals nearby. Unlike a hearing aid, which is inaccessible to the completely deaf, the Sound Sense Device has a microphone and microchip that registers volume above a certain threshold as a vibrational alert. In turn, the person wearing the device can feel loud sounds nearby, granting them greater confidence and awareness.
Recognizing technology's extraordinary leaps as well as its infinite potential for application and improvement, CEO Brian Goral said he believes tech can and should be harnessed to aid and empower people with disabilities, anywhere from blindness to attention deficit and memory loss. He wants to challenge everything we think we know about "assistive tech,” joining open-source code and existing technologies with overlooked market demands to drive more innovation in the technological subfield.
The technology already exists, Goral says, the challenge is almost entirely an economical one: convincing the “makers” that the market for such products is a viable one, or that it even exists at all.
“Because so many challenges have been thought of as impossible, the markets have always been perceived as really small,” Goral said. "But the U.N. reports seven percent of the population has some kind of disability."
Furenexo's bootstrapped, ambitious team of four, led by Goral, intends not only to produce their own affordable, high-tech assistive devices to augment lost senses, but also boasts the lofty, long-term goal of generating a collaborative, open-source, mission-driven movement to attract top innovators to the emerging market to make the products as effective and accessible as possible. The potential of current smartphone technology alone reaches far beyond commercial applications.
Goral believes the Sound Sense Device should only cost consumers about $30.
“The technology must be affordable,” Goral said. “Some of the technologies in our six-month pathway might be possible to do in an Apple watch […] But there are going to be a lot of six year olds whose parents can't afford an Apple watch. About 73 percent of people who have blindness are not employed."
The main purpose of the initial launch, Goral said, is to change the conversation around disability. Pending the success of the Kickstarter campaign, Furenexo will be looking for further collaborations in every sense of the word: partnerships with other startups as well as nonprofits, investors, open-source code contributors. They’ll also need additional sourcing, primarily to fund their next big hire. As a public benefits corporation, they’re interested in grant funding, especially from nonprofits, but are open to venture philanthropy and venture capital, so long as investors are aligned with Furenexo’s mission.
Goral said he saw no better place for such an ambitious venture than New York City.
“I see this as an opportunity to grow up and connect with people in so many different industries. Asking for help or a discussion, people have been really open and welcoming. Whether it’s about going to hardware-tech meet ups once a month, or otherwise, people want to share and help build NYC into a tech space that is second to none."
The potential of existing technology to augment human senses is vast, by no means stopping at vibrational hearing aids. Facebook’s relatively recent facial recognition ability, which we might already take for granted as commonplace, can be channeled into a tool for sight for the blind. That’s the next step for Furenexo, and likely only the beginning.
Have a news tip for us or know of a company that deserves coverage? Let us know or tweet us @builtinnewyork.