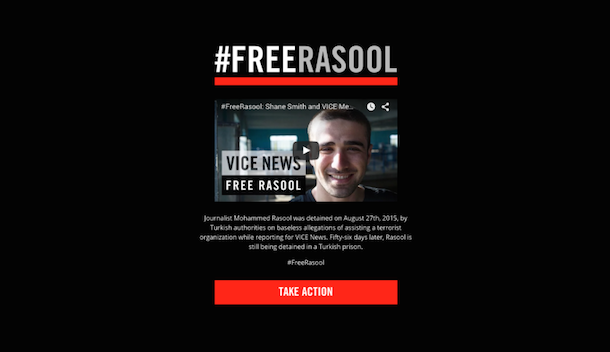 There was no news on Vice.com for 2 hours on Wednesday. Visitors were instead greeted with a black screen and a campaign video to help free a Vice journalist jailed in Turkey.

The message was spread across all of Vice media’s sites between 10 a.m. and 12 p.m. (EST), including Motherboard, Fightland and I-d. The campaign is an attempt to free Mohammed Rasool who was arrested on Aug. 27 by Turkish authorities whilst reporting for Vice.

The Iraqi born Rasool, is still being held on allegations of assisting terorrist organization ISIS which Vice calls ‘ridiculous’. He was arrested with two other British Vice journalists while covering clashes between the youth wing of the Kurdistan Worker’s Party and Turkish authorities in Cizre and Diyarbakir.

The British reporters, Jake Hanrahan and Philip Pendlebury were released on September 3 and have since returned to the UK, but 56 days later Rasool remains in prison. Rasool is a freelance journalist who had been working as a translator.

His colleagues have been supporting the #FreeRasool twitter campaign which was emblazoned across all Vice websites on Wednesday. They also speak fondly about their jailed colleague in the campaign video above.

“They’ve arrested a hard working journalist, who was just trying to do his job,” Kevin Sutcliffe, head of news programming for Vice news Europe, said in the video.

Vice was founded as a punk magazine in Montreal in 1996 but moved to New York in 1999. The company, which has grown into a media empire, covers news, tech, fashion and sports and has been based in Williamsburg in Brooklyn since 2001.